I’m putting days 5 and 6 together because they were very, very similar. That’s not a bad thing, since we felt in no hurry to do anything, and we didn’t even have to (get to) choose where to eat because any place but the lodge restaurant would have involved the 5 mile grueling drive down the mountain followed by another approximately 5 miles into town--$40 round trip, not including tip.

It rains a lot here in the middle of Costa Rica, up in the mountains, and unlike closer to the Pacific Ocean, where we could see the clouds coming in and feel the air thicken, there is no warning before it begins. Even the lodge’s “naturalist” can’t tell when it is going to rain, though he pointed out that the howler monkeys know. They do call to each other right before the rain.

On our first morning at this lodge, we took the free tour of the surrounding forest. This forced Marin to, if not overcome, confront her fear of hanging bridges (or at least the heights at which they are hung). 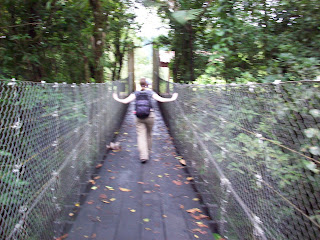 The forest is beautiful, and there’s even a small area of primary forest (this is a big deal because primary forest has never been logged and some animals, like spider monkeys, will only live in primary forest). 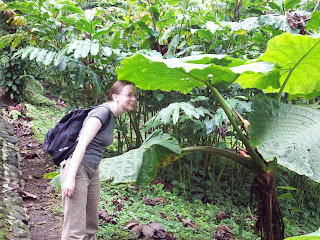 Even Costa Rica, which its strong commitment to the environment, doesn’t have much land that hasn’t been logged. Unfortunately, we didn’t see one single animal. But Eduardo, our guide, did tell us the story of the volcano, which was pretty interesting. In this story, you begin to realize how much of the landscape you’re looking at has only been there since 1968. A lot of the hilly land surrounding us was flat farmland until it got covered with tons of lava and ash. The area surrounding the volcano contains patches of primary forest, secondary forest, very new forest, rocky areas with few plants, and flat farmland. The old forest was pretty untouched by the volcanic eruption. Then there’s new forest that has tall plants. That’s where the ash fell, but not the lava. Ash is soft and mineral rich. Plants grew fast and well after the eruption. Where lava has flowed and hardened, some moss is growing, but it will take many years to break up the rock into soil that plants can really use. I found the farmland particularly interesting because it changes the landscape so much. The rainforest is wet and shady and full of animal sounds. The farmland, without the shade of the rainforest plants, is sunny and full of light. 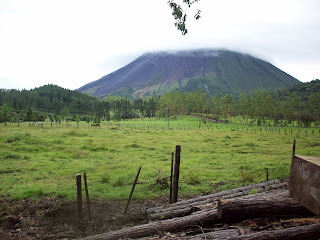 Our lodge was built specifically for Smithsonian scientists (Eduardo says there wasn’t a single volcanologist in Costa Rica prior to 1968) to study the volcano up close out of harm’s way as much as possible. After a day here, you realize that you aren’t really out of harm’s way. For a fairly big lava flow, there’s a river gorge between us and the rim, but for a pyroclastic explosion (the kind that sends huge boulders far away), you can’t be out of harm’s way and be this close. The advantage of the placement of our lodge is that the land is pretty much as it was prior to the volcano, which means old forest. It also means old farms are nearby. On our walks, we walked past a dairy farm. This means there are a handful of cows grazing out in the fields, and from the looks of the milking shed, they are milked by hand. This was very interesting to me to see a small, seemingly sustainable farm. The small farm neighborhood consisted of about four houses that were very, very small and simple. It’s odd to visit a place where you, the tourist, live so differently than the people whose country you are visiting. Anything I can say about this would just be a cliché, but I do believe that I saw enough to understand that we probably would envy things about each other. 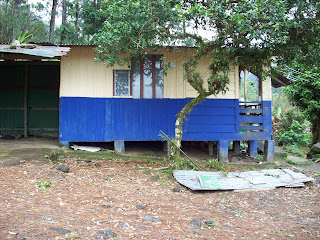 Our two full days here involved a lot of walks on our own and two with Eduardo. The second walk was a combination El Silencio walk, which involved not much silencio, and a volcano walk. We were driven to a spot where the lava is still apparent, where Eduardo sat us down and repeated the same stories about the volcanoes from the day before. I’m talking word for word, hand gesture for hand gesture. This tour was far from free. It also became clear that Eduardo was a good local guide but no naturalist. When he saw a bird, he’d pick up his bird guide and look for a picture, just like I would if I had a bird guide. What Eduardo was good at was spotting animals that were pretty well camouflaged by their surroundings. We saw a pair of howler monkeys in a tree and a two toed sloth (the meaner of the sloths). All three of these animals were not deep in the jungle, but were in trees found along the sides of a busy highway.

We also used the lodge pool, which is probably the nicest manmade thing here. It is huge, and very welcoming after a day of walking. Even though the temperatures here in the mountains are very pleasant, it is still humid and sticky. 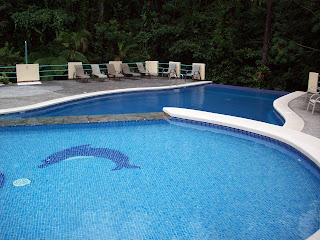 I’d like to say that we saw a lot more of the volcano, but it was obscured by clouds at least half the time (and by obscured I actually mean rendered completely invisible), and at other times, it wasn’t doing much. However, there were periods where it was throwing out some hot rocks, which we could watch rolling down the side of the mountain and we could definitely hear as well. We never did feel the ground shake, as some visitors do, but I have felt the ground shake plenty in my life, living in California.