So, why did we go to Arenal? The main reason is that Arenal is an active volcano. An actual rumbling spewing out lava volcano. In 1968, no one had any idea it was a volcano, and one day it began shaking and making a rumbling noise, and a few days later, it erupted with enough force to throw large rocks a couple of miles and to cover an entire village and its 80 plus inhabitants under meters of rocks and ash. It still is active and has had a few major eruptions since 1968. Another reason to visit is that, due to the altitude, there is a different ecosystem than the rain forest we had just visited. It’s called a cloud forest. It still has many characteristics of the closer to sea level rain forests, but the plant life reminds me more of some of the redwood forests of California or the Hoh Rain Forest of Washington state. 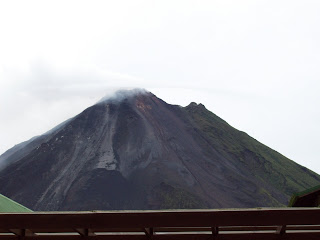 We arrived at the lodge, which is 9 miles up a steep, rocky, horribly rutted hill. If you’ve ever been on the Indiana Jones ride at Disneyland, where for about 30 seconds, you jeep throws you up and down, left and right, that’s what the ride up the hill is like, except it’s not 30 seconds. I felt as if my breasts were going to bounce out the window and go bouncing down the road. The lodge does not do any transportation of its own, but going down the hill for any reason and then back up again will cost $40 in a local taxi. This did not seem at all exorbitant after experiencing the road and realizing the wear and tear it must have on shocks, tires, and brakes. But it did make me realize that we were probably going to be at the lodge for all three nights without going anywhere else. Forty dollars is too much to spend for a casual shopping trip into town. I thought to myself that this lodge had better be really, really nice.

We checked in with a not very friendly receptionist. No one offered to show us to our room or to take a bag. (See, I did get used to great service after all). It was raining harder than I’ve ever experienced in my life. We rushed to our room, opened the door, and found a bed facing a large window, a small table (like a coffee table), another small table with a fan on top, a closet without doors, and a sink. The ancient mattress on the bed had no box springs. Behind a door, there was a bathroom that looked like it had had many repairs. 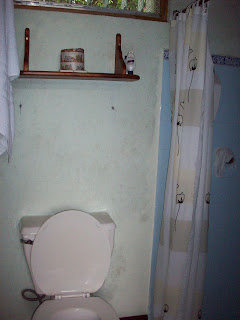 A message was posted on the front door to us “urbanites” to not get freaked out when “country guests” show up in our room. By that, they said they meant spiders and ants, but as we learned, it also meant lizards. 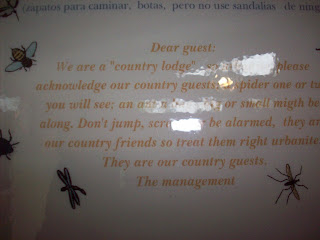 Marin wasn’t so bothered by the lack of television. She’s become accustomed to that while living in Russia. We were both bothered by the realization that we were out of luck as far as the internet was concerned. And then Marin pointed out that we couldn’t even see the volcano—the entire reason I got this room was the volcano view. On top of that, I was reading a book, The Master and Margarita, that I wasn’t liking too much. But there really was nothing to do but read. It was raining too hard to even attempt to look at the hotel grounds.

The book I was reading was one of Marin’s favorite all time books, and that’s saying a lot. She was very amused at my not liking it because I had told her that the title had made me think that it was going to be about a rich guy and a servant falling in love or something like that. She said, “Do you even know me? That is never the kind of novel that would be a favorite of mine.” Since she was not liking the book she was reading much, she decided that she would write the story that I had expected The Master and Margarita to be, which she is letting me put here. She put her misery into creativity, and I decided that if I think of this as camping, we have a very, very nice tent, and I can live with that. Also, forced to read my book, I found that I got to a point where I couldn’t put it down, which unfortunately led to the realization that I hadn’t brought enough to read.

Around nine, we decided to call it a night and fell asleep. Sometime in the night, the rain stopped. I woke up, looked out our window, and saw the volcano very close by with red lava spurting out of the top and flowing down the sides. It turns out that we did have a view, but it was so obscured by the clouds that we couldn’t even see the mile or so to the rim of the crater. It was stunning.