Today was a traveling day, so it will not be so filled with the joys of vacation.

It’s been a very long time since I’ve been on a vacation and didn’t want to leave a place, but I really didn’t want to leave the Gaia Hotel. I awoke extra early because we had to check out, be driven to a bus stop and catch our bus to Arenal, but I found that I had a little time, so I went back to the pool to see if the monkeys were there. Even though 6:30 is too early for squirrel monkeys, I was rewarded with the sight of many colorful birds (which must disappear when the monkeys show up) and the sound of the Howler Monkeys. They were far away, but their throaty roar can be heard for very long distances.

We were quickly thrown into the real world. The hotel van dropped us at the bus stop (which was just another hotel) in Quepos, the nearest “city.” We were left standing outside by a casino and an adult entertainment place. Luckily, we weren’t there for long. Our friendly bus driver came right on time and told me that our ride would be about three and a half hours. I was happy because that was a half hour less than the website said the trip would take.

I don’t think I’ve mentioned yet about how few women we’ve seen in Costa Rica (other than tourists, I mean). At our first hotel, there was a room maid and that was it. The receptionists, drivers and waiters were all men. At our second one, even the room cleaners were men. At Manuel Antonio, all men. I did see women. They would be at the sides of roads waiting for a bus with a child in their arms, or they would be working at some of the less fancy restaurants in town. Marin, who had visited Egypt recently, was no stranger to this observation.

I found the bus trip a little scary. Almost all roads are just two lane roads, so our driver did a lot of passing and, a few times, I was sure we were going to have a head-on collision. I would have worn my seatbelt, but it was broken.

After three and a half hours of travel, we pulled into a stop that seemed to have about 7 or 8 other Grayline buses just like ours. We were told we had 30 minutes, and I wondered why we weren’t at Arenal. The thirty minute place had one tourist shop with very tacky tourist wares and two little restaurants without posted prices. There were some red macaws to look at, but it was a long 30 minutes. I noticed that premade signs, like Open House signs you might see at a corner, started going up next to the buses and that our luggage was being removed. Our driver found us and told us that we were going to now transfer to another bus. He introduced me to the new driver and the new driver said that the trip would take about two and a half hours. Ahhh! This is so different than what the company website said. But of course, we are in the middle of nowhere, and all I could think was that I was going to find another way back to the airport in a few days.

Our new bus took off and the terrain got interesting as we got away from the ocean and started climbing to a higher elevation. It started to look like California, but greener. There’d be fields of grass with cattle grazing (Marin called them goat cows because they have long floppy ears) and an occasional tree that looked exactly like an oak tree. 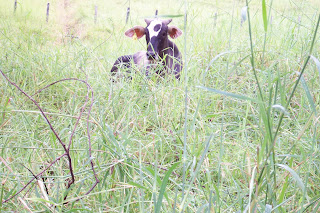 As we climbed, the roads got worse and the rain started pouring down, and pouring and pouring. There were only two other people on the bus and they were going to a placed called Arenal Springs Resort. The bus dropped them off at the front door, which meant we had to climb up a very steep part dirt road in the rain. It was unnerving. And Marin said to me what I was thinking already: “If they won’t do drop-offs at our hotel, what is the road to there going to be like?”

Our driver got a bit lazy at that point, and tried to talk us into transferring to a cab that would take us to the Arenal Observatory Lodge. He might have been trying to help, but the cab’s proposed fare of $25 to take us down the road a bit was too high, so I told the driver we wanted to be dropped off in town, as we had already said. So, back down the steep hill we went, and into the town of La Fortuna. La Fortuna is a touristy little town that is set up mostly for people who come to see the volcano. Most of the shops are restaurants or places selling tours. But it did have a little central park and a church, so we were able to get some sense of a Costa Rica town. We tried to do a little shopping, but the rain was getting to us, and we were worried about how to get to our hotel.

We walked to the park, as our wonderful Frommer’s Guidebook had told us to do, and there was a taxi. The driver’s proposed fare of $20 seemed good because he was driving us further than the other cab would have. But this made us realize that we weren’t going to be taking little jaunts into town, either. I hoped that the lodge was really nice, and had some television reception and internet access, along with the best possible volcano views.

It turned out that the driver of our cab was really kind and friendly. He spoke almost no English, so my poor Spanish had to do. We have learned on this trip that Costa Ricans love you to try Spanish, no matter how bad. Our driver felt that we shouldn’t take the bus back to the airport and offered us a ride to the airport at a fair rate, so I took him up on that. We had a few funny moments there where he didn’t know if my request to be picked up at doce mean noon or midnight, and I couldn’t remember which word in Spanish meant noon and which meant midnight, but we figured it out. So, as I write this, I’m trusting that he will be here for us as planned.