A good sleep will cure a lot, so it shouldn’t have surprised me as much as it did that I woke up feeling refreshed and happy and ready to explore. The afternoon before, I had had the sense to ask for a tour of Manuel Antonio National Park. I did this not so much because I wanted a tour. I like to explore on my own when possible. I couldn’t figure out how to get to the park. The cute little golf carts that took us up the hill were a sign that no taxi was going to drive right up to the front door of the hotel, so I figured buying a tour would be my way of ensuring transportation to the park.
Are all Americans this uncomfortable with great service? I have to describe more about what the Gaia was like. There were always two receptionists on duty, who stopped whatever they might be doing the moment I walked in. If I said, as I did on day 3, “I would like to go shopping outside of Manuel Antonio National Park,” one of the receptionists would get on the radio immediately and ask for a driver to be ready down the hill. Then a golf cart driver would show up right outside the reception area, whisk me down the hill, but stop to show me if there was an interesting animal in one of the trees on the way down the hill, and drive me right next to the van that would take me to the shopping area. Oh, and the golf cart driver would ask about my stay. When Marin was with me in the cart, there would be some friendly flirting as they tried to get her to speak some Spanish. The van driver would then take me to where I wanted to go, and ask what time I wished to be picked up. He spoke little English and was kind and grateful for the little Spanish I could speak. When I returned, there was the driver, waiting, and as we approached the hotel, he would radio that Senora Vicki was returning and the golf cart would be waiting. And what did I do? I felt uncomfortable because I didn’t know how to handle all this, and I especially didn’t know how, when, and how much to tip (I caught on after a while). It was probably good for us that the Gaia was pretty remote, so we had to learn how to negotiate all this great service.

What this brings me to is the National Park. Manuel Antonio is the smallest National Park in Costa Rica, and that’s saying a lot because this tiny country (put together New Hampshire and Vermont and you've got the size) has many National Parks (about 25% of the land). You can walk every trail in the park in one day, and that includes stopping to look. It is one of the most popular parks because it is relatively close to San Jose and easy to get to (by Costa Rica standards) and because it has a large diversity of plants and animals. William, the hotel’s favorite park guide, met us at the hotel. I noticed right away that he carried a large telescopic lens on a tripod. I thought it was a camera at first, but it turned out to be just for viewing.

In case the steamy weather and the tropical plants didn’t clue me in, I would have known immediately that I was not at home when we got to the entrance of the park. Before getting there, all the tourists are surrounded by guides who are dressed exactly like William and who are all carrying the same telephoto lens. The guides do not work for the park. They make a living by being hired by people to walk them through the park. Most people turn them down, but the guides keep following them all the way up to the place where you hand over your ticket and enter the park, saying, “You’ll have a much better visit if you hire me.” They are pushy. Worse than that, for most Americans, is that you have to negotiate the price of their services with them.

As soon as you’ve hired a guide, they back off. Since Marin and I showed up with William, we didn’t have to deal with them. William, probably in his mid-thirties, was older than most of the guides, and he probably is envied by them because he doesn’t have to stand out there and negotiate.

As soon as we got in the park, it was clear how necessary a guide was, and it was also clear that the very same guides who are hustling people outside the park really know what they are talking about. They become serious naturalists once inside.

This is what William would do: He’d take a few steps, look around, stop and look more carefully at what looked to me to be a sea of plants. Then he would place his telephoto lens on the tripod in the middle of the wide trail, look through his lens, make a few adjustments (the adjustments took all of about 10 seconds), and then invite us to look. There we would see a magnificent spider or bird or lizard. He would tell us about the animal—why it liked that plant, what its predators are, what its coloration did for it—and then show us how we could stick our cameras’ lenses onto the lens of his device and take pictures. 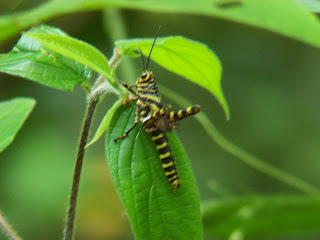 At first he was so good at this (and I couldn’t for the life of me see the real animal with my own eyes) that I wondered if he somehow had pictures loaded in the lens and was only making us believe that we were looking at animals, especially since the first animals stayed so still for us. Later, we got better at seeing the animal with our own eyes (but never at finding them ourselves).

In approximately two hours, we saw grasshoppers colored like none I’ve ever seen before, sloths (both the two toed and three toed species….did you know that the two toed ones are kind of mean?), Jesus Christ lizards, which run across water, spiders building webs, a toucan (that was really exciting), and two howler monkeys. One of the howler monkeys, asleep in a tree branch, had draped his bright white testicles over a smaller branch, so they were hanging there, kind of like laundry drying on a line. They (the testicles) are completely white. William, who exhibited absolutely no sense of humor, said, "Nature porn!" He was pretty amused with himself. 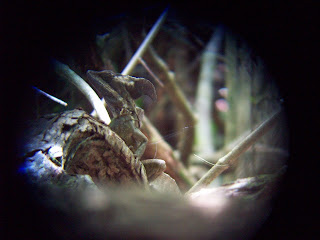 After a life of imagining steamy rainforest jungles as being way inland with a murky river nearby, it came as a surprise the the Pacific Ocean forms one of the borders of the park. As you are walking past the dense growth, you can hear it. Then suddenly, there it is. There’s maybe 100 feet of sand, then a stand of coconut trees, and then jungle. 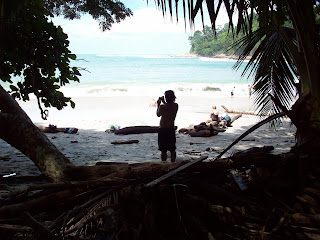 We walked along the beach for a bit and then we exited the National Park. Immediately outside the exit gate, there are all kinds of people waiting to sell you things. Some of it looked poorly made (actually most of it looked that way), but much of it looked very nice. But it was such a shock to be suddenly thrust into the harsh light and heat and noise outside of the more shaded park, that I had very little time to think about all this. I did stop and buy some pottery and then William walked us back to our starting point, and there was Omar, our hotel driver, waiting to rush us back to the hotel.

Back in our room, I turned on the television. The day before, almost every channel was carrying Michael Jackson’s service, but today, Heaven. It was noon and All My Children was on. I decided that I was having a perfect day. Amazing natural wonders followed by a break in front of the television. Following that, Marin and I decided to try out the hotel pool. This is a terraced pool, built on a few levels going down the hill. I quickly realized that I should have used the pool the day before, too, to get the feeling of travel out of my system. After a swim, where we could stop often and look out over the land and the Pacific Ocean beyond, we went back to our room, where Marin took a nap and I finally figured out how to use their wireless internet system (it wasn’t functioning in our room, so we had to take the laptop somewhere else on the property). The dark clouds started to gather, the air felt oppressive (Marin had described it as walking through soup), and it started to rain. 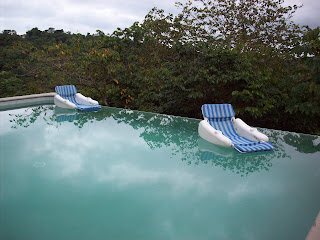 After the rain, I went back outside with my computer and noticed that the trees were moving a lot. They were full of squirrel monkeys. I watched as they wrestled, tumbled, and jumped from tree to tree. There were babies, adults, and adolescents. I went and got Marin and we watched together for a very long time. At one point, I tried to count them, but they were jumping around so wildly that I couldn’t. There were a good two dozen of them, though, and many were not more than 15 feet from us. It seems hard to believe that these are an endangered species, but their habitat is getting smaller and smaller, and some groups have found homes right next to some of the hotels. Our hotel was built on a biological reserve that is no longer in use, but the builders made a commitment to preserve most of the reserve.

One thing that’s difficult to get used to is that, because we’re close to the equator, the summer days don’t lengthen here. At home right now, I have enough daylight for walking dogs until about 8:30, but the sun sets here at around 5 pm, and by 6 it is completely dark. I noticed that by day two, we were already kind of living by the light, feeling like the day was finished by 6. Before dark, we went to the hotel restaurant and had linner (or dunch). And thus ended a very happy day.

Why do I imagine that two-toed sloths would speak with a Southern accent?

That's funny. What kind of accent would the three toed one have?