First, you must understand that I am a horrible traveler. I dread leaving home. I worry about my dogs, my plants, whether or not I left anything unlocked or turned on. I worry about getting there…what if my luggage is lost, what if the hotel isn’t expecting us after all, what if people don’t understand English. I really envy people who thrive on such nervousness. People have said to me, “Running into problems is half the fun.” That’s nice for them. By the way, all of those things have happened to me more than once, and I’ve lived, but that doesn’t stop the worry. Then there’s the part I hate most: getting there. I don’t like flying. The emptier the flight, the more likely (I tell myself) it is to fall out of the sky. Nutty, I know.

This trip to Costa Rica hit on all of my travel woes. To get there took two flights with an almost four hour layover between. The second leg left Los Angeles at 2:15 a.m. The flight, on TACA airlines, was completely full. TACA, which oddly goes by different names depending on where you buy tickets, is a major Central American carrier. The airplane was medium sized with three seats, an aisle, then three seats. This created the narrowest aisle I’d ever seen. Even the drink carts were about half the width that they usually are. The attendants, who were very professional and polite, kept bumping into my shoulder and elbow. They couldn’t help it. I’m sure they were doing it to a lot of people. I slept a bit on the flight and then they fed us breakfast. I ate because I thought I should, but it was really horrible. I had pancakes, which were not fresh off the griddly and which oddly came with a croissant and a muffin, along with a fruit cup. I ate a pancake, realized it tasted awful, and then ate nothing else. Soon I was looking at Costa Rica out of the airplane window. I could see green everywhere, with houses clinging to hillsides, blue sky, and mountains beyond.

No luggage was lost, and the driver I’d asked the hotel to hire for us was there waiting for us. Unfortunately, we had a 3.5 hour drive ahead of us on rough roads. At first it was wonderful. When we got out of San Jose, the capitol city, we were surrounded everywhere by tropical plants. Then, I looked out the window and saw a bird of prey with a huge wingspan. I looked in my guidebook and realized it was an osprey. Soon, I saw many osprey, which are beautiful birds of prey, and because we were high above the forest floor, they were at eye level. However, looking out the windows was my second mistake (after the pancakes). With the exhaustion and the pancakes and all, I realized I was feeling really carsick. So I spent the rest of the trip worrying that I was going to vomit all over the nice SUV we were in.

About halfway there, our driver stopped at a bridge that was famous for being over a river with crocodiles in it. I was very glad to stop. My stomach settled some, and then there was the thrill of the crocodiles. They were huge. According to my guide book, then can get about 21 feet long. At least one of these must have been that long. At this stop, I also got to see one of the many restaurants we had passed on the road up close. They are called sodas, and they are basically a roof held up by posts with a few tables and a kitchen inside. It was dark and felt very inviting. And there was something very old movie-ish tropical feeling about it. I felt as if Humphrey Bogart was going to come out of the back and ask me when I got into town. Too bad I couldn’t eat anything.

Back in the car, more windy roads, and then, thankfully, we arrived. For our first three nights, I chose a hotel called Gaia that I’d read great reviews about. The car was met by two nice young men. One got on a walkie-talkie and announced our arrival to someone. The other shuttled us into the back seat of a golf cart and drove us up a steep hill. As we got about halfway up, he stopped the cart and pointed to a tree right next to the little road we were on. There was a sloth!

At the top of the hill, we were greeted by one of the receptionists, and another worker who brought us each a tropical fruity drink. It was cold, refreshing, and delicious. After they felt that we were ready, we were shown the grounds, including the pool and spa, and our lovely room with a DVD player, satellite television, and a Jacuzzi tub. Marin and I walked around a bit and then we had tapas at the hotel lounge, which is open air, like the sodas that we saw, except it was on top of a hill and clearly very designed. We could see osprey all over the place and we could see the rainclouds coming in from the Pacific Ocean. 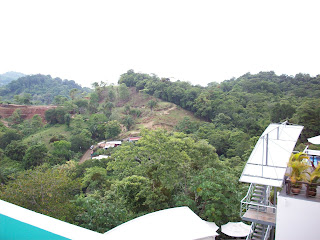 The air just got more and more humid and the sky grew dark. We heard thunder. Then it started to rain. It was about 4:30. I was tired, but Marin said that we should stay awake. She’s the world traveler, so I listen to her. I turned on the television and Marin opened up her book. Five minutes later, the world traveler was fast asleep. I joined her and we woke up the next morning. 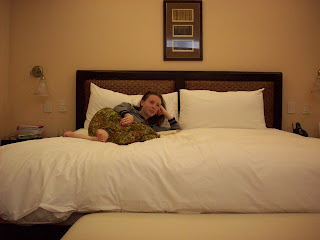 Love it! The magic of laptops comes through!

Oh, and that's a cute picture of Marin.

Seriously, I am loving having my laptop here. I stay connected with everyone, I can dump the day's photos so I can take more, and I can write about what's happening in close to real time. After I wrote this entry, I realized that I would soon forget everything about day 1 except for the crocodiles and the discomforts. Now, I have a way to remember better. (I could have kept a diary, too, I know, but this is nicer).
And unlike me and Cameron, Marin doesn't run hiding from cameras, so I will have other photos of her.

Great stories. I am loving your trip!

Oh, this is making me relive my trip to CR many years ago! The birds are amazing, one of the first things that tell you you really are somewhere else. (And your story about the pancake/muffin/croissant breakfast reminded me of when I finally realized that Au Bon Pain would be filing for bankruptcy in Boston: They started advertising a new breakfast treat that was a muffin wrapped in croissant dough.)

TWL: Thanks and there's more, much more, to come.
Shushu: I have been laughing for days about the muffin wrapped in croissant dough. Not just doubling on the carbohydrates, but two of the most fat fortified things you can get. Yuck! So true about the birds. It's funny, though. Since I got home, I'm noticing the birds in my neighborhood more.