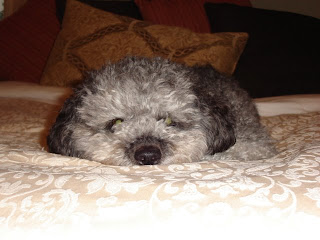 Well, what an interesting Spring Break it's been. Let's tally it all up. In the plus column: I slept, I shared meals with several friends, I enjoyed hosting Easter dinner at my house, I planted a little vegetable garden, I finished taxes, I took walks, I caught up on mail and bills and the need to cancel some subscriptions, I watched 5 movies, I blogged a lot, I finished reading In Defense of Food.

In the minus column: I had a dentist appointment in which the novacaine hadn't quite done its thing before the drilling began. I love my dentist, who felt worse than I did about the whole thing, but since this is one of my greatest fears, the memory stuck with me for several days. In related news, I found out that I can really jump right out of a seat when I need to. My tax bill was rather high, to put it mildly. I have a litter of kittens in my basement. In related news, dog doors to outside also can be cat doors to inside. Although I made real progress on parts of my yard, I made almost none on other parts. And I had the strangest Deja Vu experience ever. It still has me shaken. But it is actually too boring to go into. 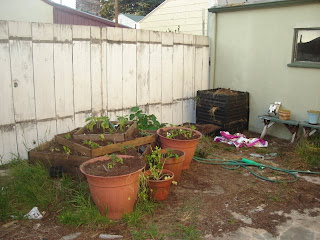 About the kittens: The mother gave birth in an abandoned computer monitor. I didn't look there because I hadn't realized that Cameron had gutted the monitor. Marcel (my dog)found them and now he's obsessed with them. Their eyes are open, but they're not walking around, so I'm guessing they're about 3 weeks old. I went to take a picture tonight, only to be met with some very scary growling. Apparently, the mother (probably a victim of a foreclosure) is taking care of her babies.

The tube to the monitor is on display on the top center shelf in your lime green room. So feel free to put it back together.

I can’t imagine how a cat managed to get into your house past a group of vicious dogs. I mean it could have been licked to death!

Hmmm, perhaps it wasn’t the traps that got rid of all the mice.

Haha...I was going to say, there's your mouse problem taken care of.

Well, I do love the dog shot.

I am reading the same book by the way and am enjoying it. I think I am off chicken for a while though.

Glad you had a good vacation (except for the dentist incident).

Hey CMB...You understand the vicious dogs all too well. When I said Marcel was obsessed with them, it's because he seems to feel that he needs to watch over them now that he discovered them. He sits staring at the storage area. That mother cat is big and would probably kill him. I don't think I'll be putting back the monitor anytime soon.

marin..I keep meaning to write about this movie because I loved it so much that I want the entire world to see it. I didn't see it this week, but see Lars and the Real Girl. This week, I wouldn't highly recommend four of the five. I do highly recommend Rachel Getting Married with the caveat that there was a lot I could personally relate to, which probably pushed it over the line from like to love for me. The other four were so-so, except for The Jane Austen Book Club. Steer clear of that.

Libby: I am more than happy to go on at length about Bay Area foods that are local, healthy and (in the case of meat) ethically killed. If you're off chicken due to those reasons, I can help.

I know what you meant, but the idea of a cat being a foreclosure victim reminded me of this cartoon:
http://bizarrocomic.blogspot.com/2009/04/cost-of-peace-of-mind.html