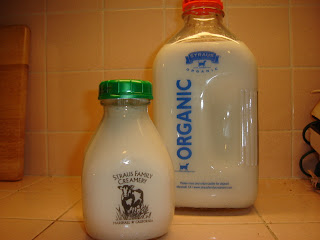 Aren't they beautiful? When I first saw them, I thought that I had gone back in time to when I was a little girl and there were milkmen who left milk bottles in bumpy metal boxes on the front porch. That was the early 60's and only a handful of people on my block were still getting their bottled milk from the milkman. Everyone had already found the supermarket more convenient. Still, the bottles were and are pretty. Better than that, they get returned to the dairy and sterilized and reused. But best of all is how this milk tastes. It really is noticeably better than any other milk I've had. It tastes sweet and creamy, and did I mention it comes in a beautiful bottle? Thanks to my friend N for telling me about the Strauss Creamery.
Speaking of friends, thank you, PJ, for giving me several ideas for first blog entries. Thanks to you, I'm about to start my second month (not consecutive) of local eating. After reading The Omnivore's Dilemma this Summer, I realized that I needed to change some of my eating habits. The first change was pretty easy--no more high fructose corn syrup. That was easy, it turns out, because I don't buy too many prepackaged foods. Then came the hard part. After reading about how animals were treated, even at many organic farms...well, once you know you can't not know. So, on my search for humanely treated animals, I came across localvore sites and thought I should just go all the way and try to eat as locally as possible. The thing I expected to be hardest, protein, was surprisingly easy. There are several local farms and ranches that raise beef and chickens. Dairy products were a little harder, but not impossible, thanks to places like Strauss. But there are many foods that can't be found in the San Francisco Bay Area. So, decisions had to be made. What did I not want to live without for a month? For me, the answers were flour, sugar and tea. Clearly, I'm not too hardcore about this. I was surprised at how much I enjoyed the month. I learned a lot about local farms. I was surprised by the foods I missed the most. I missed chocolate, but I expected to. But the first thing I ate on October 1 was oatmeal and the second was a banana. I found that I made some changes that I've stuck too, but I also found that I kind of liked the discipline of local eating.
So, I'm back to trying it again but January should be harder than September. It was easier when tomatoes were in abundance. Doing this gives me lots to write about, too: the economic feasibility of eating locally, food finds, the time involved in shopping.
So the New Year begins with my first blog and healthier, more ethical eating. I hope to share both with whoever happens along.

We're all so glad you've joined the group, Eve!

OK, here's a more serious comment. High-fructose corn syrup is insidious and surprisingly difficult to avoid. As you know, I've been trying to cut it from my diet for the past couple of years, thanks to Men's Health magazine. Just last Saturday at Safeway I had to spend way more time than I should have searching through the bags of dried fruit for varieties that didn't use HFCS. It's bad enough they sweeten fruit in the first place. I used to just grab bags as a healthy snack, but now I realize I need to check them over carefully.

I would have been bummed out if you had not made the first comment.
That is truly pathetic that companies can't even manage to sell dried fruit, with its already concentrated sugars without adding more sugar.
Here's the strange thing. Our diets will probably be improved by the scarcity of fossil fuels. The price of corn has doubled because people think they're doing a good thing by buying biofuels (they aren't--the amount of energy out is small and the waste is huge). So, HFCS is no longer so cheap. Now, we just have to break ourselves of our national addiction to it.

You're going to be appalled by the dinner I made for New Years'. Basically, I made a traditional Russian table, except without pork, of course. The difference is that Russians don't use salad dressing so much as mayonnaise.

But you know what food here totally doesn't contain (even candy and soda, though of course I wouldn't really know about those)?

Marin, I was kind of surprised when I read the Ominvore's Dilemma about how very American HFCS is. I'm used to us exporting, at low cost, all of our unhealthy ways. But corn as a concentrated sweetener, remains pretty much in the US.
It would be pretty horrible of me to be appalled at anyone's dinner, especially one from another culture. Besides, I only need to go back in time a couple of decades to remember serving you Tater Tots and Kraft Macaroni and Cheese for meals.
Please tell me, though, what a traditional Russian table is.