Back to School Issue 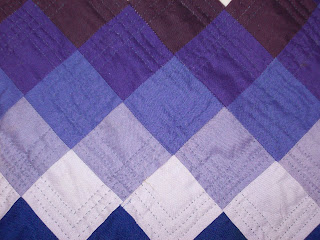 Good news! I just finished a time-sucking part of the quilt I've been working on for well over two years (or not working on, since that's the problem). This summer, I decided I would work on it a bit every day, and what-da-ya-know, it actually worked! Now, I get to move on to a new section, and a less time-consuming stitching pattern. 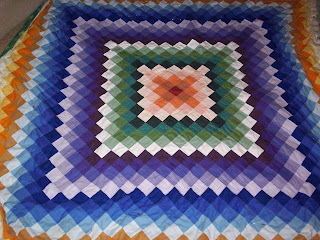 School's back in session, and since I started out braced for the worst, it isn't so terrible. Eventually, the parents of California will realize that 40 kids in a class is not in anyone's best interest, and decide they're willing to pay more taxes to make things change. Won't they? By the way, we were given $100 for supplies for almost 200 kids a day for 180 days, and that's $100 more than most teachers in the state received.

But in the spirit of school, here are a couple of lessons I learned today:

1. Something I just learned today and wish I could take the lesson back: The cinnamon currant loaf at Acme Bread is delicious--really delicious, and it comes in a size a little too big for one helping but too small to save much for later. I'll try to forget I know this.

2. Something I learned today that has made me giddy with power: My teacher look works on obnoxious adults. When I got out of the San Leandro BART station today, there was a woman in a car with windows rolled down listening to VERY LOUD music. Not that there's an age where it's appropriate, but she was well into her thirties, and should have known better. So, I gave her my teacher look, kind of without thinking. My teacher look involves making eye contact and not letting go of the eye contact, while making your face look completely without emotion. This was learned in a study on primates, and alpha male behavior. Even I was surprised when she turned down the music. Warning: I've had years of practice with the teacher look, and I definitely wouldn't suggest a man try it on another man, since it can be seen as a threat. Remember that as much as creationists would like to ignore it, we are, after all, primates.

3. Something I learned this week that I should have known all along: the entire country has not suddenly awakened from eight horrible years to renewed compassion and common sense. I thought that a sensible and compassionate call for compromise would do the trick on Health Care, but a lot of people seem determined to continue our run as the only industrialized nation to believe that health care is only for those who can afford it.

And why do I think people will soon be willing to pay more taxes for what they want?

I know that look! Will you train me?

I would be happy to train you, as long as you promise to only use your powers for good.
Thanks for the quilt compliment.