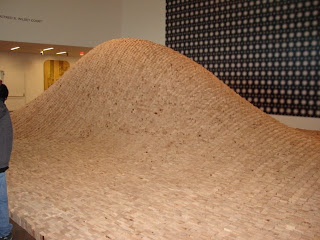 Happy New Year! I've never sensed so much hope for a New Year as I do for 2009. Sadly, that is probably because 2008 has been so awful. I do not envy our new President. He can't possibly live up to our hopes. On the other hand, I'm pretty sure he can't make things worse.

So, how did my 2008 come to an end? Honestly, there was frustration and disappointment, but with hope for a better 2009. I have been on my much anticipated two week vacation. The first Monday, I made a doctor's appointment because I wasn't feeling good and it turned out I was so anemic that I was very close to needing a transfusion. I am currently taking 1,183% of the recommended daily requirement of iron. I think I need to stay away from magnets. Surprisingly, after only 10 days of taking the iron, I am feeling way, way better. I can walk upstairs without getting out of breath.
I wanted to have a memory of doing something outside of household chores, so I decided I would go to the new California Academy of Sciences, which was completely rebuilt and opened to the public in September. I had been looking forward to this trip because I love our Academy of Sciences, and a lot of expense was put into this revised museum. I chose a Tuesday and I went early, thinking that even though kids were out on vacation, it wouldn't be as crowded as a weekend. When I arrived, I saw two of the longest lines I'd ever seen. I've been to some of the world's great museums and to Disneyland, but I've still never seen lines like this. I stood in a long line of thousands of people, assuming that it was a ticket line. After about 10 minutes in line, I was told by a helpful woman that I was in the members' line. I couldn't believe that the members couldn't just walk right in. So I moved closer to the museum to find the ticket buying line. I saw another line of thousands of people, but that was the ticket holders' line. Then I heard an announcement that there were no other tickets available for the entire day. Those poor people in those lines had to wait for people to exit the museum so that they could have their turn. The lines were not moving at all. I was very disappointed, but also glad I hadn't purchased a ticket on the internet because I would have been stuck in the ticket holders' line.
I walked across the street to the De Young Museum. I went in, and for some reason, did not want to spend much time there. I had one destination in mind and nothing else seemed good enough. I did walk around a bit, though. It turns out that a lot of the museum can be seen for free. So, I was able to see the wonderful piece above by Maya Lin. It is hard to tell from the picture, but it is totally made of 2x4's. The landscape is determined by the length of each 2x4. I took a closeup photo of some of them: 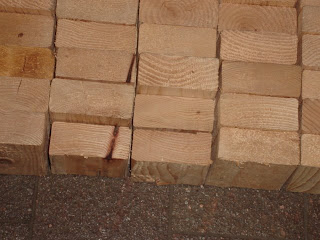 This is a great model of calculus. I doubt if that is what Ms. Lin had in mind, but it was what excited me most about it. The volume of the sculpture can be determined by adding together the volume of every 2x4, which is simply length x width x height. Calculus was invented with the idea that you can determine the volume of something that seems impossible to measure by assuming that it is made up of an infinite amount of measurable shapes. Beautiful.
I am no Maya Lin, as you can see from my end of the year project. I built a small fence. The old one had rotted and had fallen down, so something had to be done. Cameron, my advisor, was available by phone to answer my questions, but I actually did build it myself. I can't understand why I'm not better at building things. I'm logical and mathematical. Carpentry is kind of like sewing with wood, and I can sew. But, alas, I am no carpenter. However, the fence is strong enough and there's beauty in that. 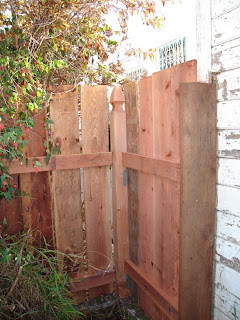 What a shame about your trip to the Academy. However, the info was helpful as I was thinking of going. Think I will wait some more and stick to The De Young or Palace Of The Legion Of Honor.

Tom Sawyer can help you paint that fence. He says it's loads of fun! Then it will look just grand.