If You Can't Stand the Heat

So, my summer resolutions were kind of slowed down by two days of work and a horrible heat wave. I was complaining about the heat to my sister, who asked what the temperature was. I complained, "90s!" This was followed by a moment of silence where I realized that my sister, who lives in St. Louis, was probably less than sympathetic. Seriously, though, it was very uncomfortable and the state is burning up, which it's not supposed to do until September/October. This is going to be a tough year.

Yesterday, I had a day off and I decided to not try and work through the heat. Instead, I spent the entire day reading Miss Pettigrew Lives for a Day. If you like Hollywood movies from the 1930s (and if you don't, I don't want to hear about it), I think you'll love this book, which reads like a screwball comedy. It was charming and funny and a very quick read. But I think that there's more to it than that, too. I think it was a look into the inner life of a woman who has been invisible her entire life, but who finds that she has skills that give her some power. And though we only see the other main character through Miss Pettigrew's eyes, it was a pleasant surprise to discover that the beautiful blonde young woman with pretty loose morals was actually very intelligent and kind.

This morning when I woke up, it was at least twenty degrees cooler than it had been for several days, meaning that I could get back to my cleaning frenzy. It was time to work on the room I most dreaded...the kitchen. Here is a before and after of the worst cupboard: 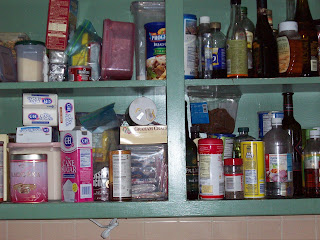 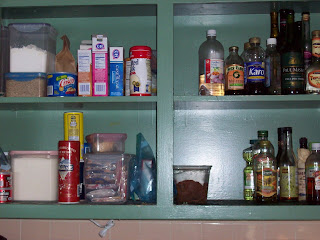 A clean cupboard does something to my soul. Sad, but true. There's a sense of peace that comes to me when I look at it, and the hope that I can keep it that neat (though I've had my own kitchen to take care of for twenty-nine years now, so the odds are against me that I will change). Anyway, I can enjoy it for a while, and I can enjoy my orderly kitchen for an even shorter while. If you know my kitchen, you can have fun listing what I changed. And I've been saving for some changes in my kitchen. Feel free to weigh in on what you would change. 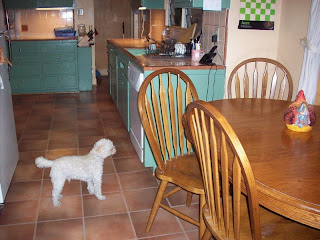 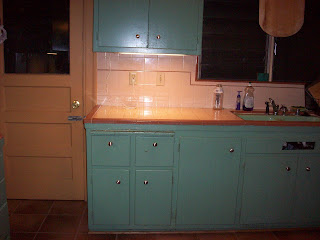 Now, back to my cleaning frenzy.

Oh, you should definitely lose the dog, he said jealously.

I think you can be a little more creative than that. Has Groomer Has It taught you nothing? Marcel can be dyed in lovely, muted arts and crafts period colors.

And if I know our dog, he wouldn't turn up his nose at a little coat made of lovely William Morris-designed fabric -- Strawberry Thief, perhaps?

By the way, there's a very good chance that Groomer Has It has, in fact, taught me nothing.