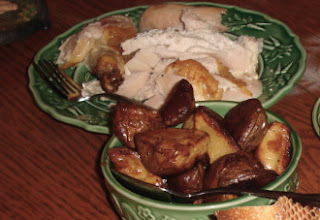 When I was a child, my Grandmother would cook a special meal every Sunday and invite her three children, their spouses, and her nine grandchildren. Her house seemed huge, though I now realize it was only two bedrooms/one bathroom with a tiny front yard and an even smaller (off-limits to us because of Bodo, the hunting dog) backyard. We cousins had the run of the front yard, the long driveway where Grandma planted sweet peas every summer, the living room and the guest bedroom, where I would be the teacher when we played school. The kitchen was where the women would hang out and help Grandma. The den is where the men would sit and yell at the football games on television. The meals were simple and predictable (I mostly remember fried chicken and pot roast, mashed potatoes and green salad). I loved going and was sorry when we missed a Sunday (my father was a firefighter who often worked Sundays). I didn't understand until I was older how amazing it was that my Grandmother did this. She had a full time Monday to Friday job with Kraft foods. The morning after having dinner for as many as seventeen people, she would get up and take the train into San Francisco.

Every Wednesday, PJ comes over for dinner. Like my Grandmother's Sunday dinners, this routine means a lot to me and I have a lot of memories to go along with it. I'm not quite Grandma, though. My numbers have sometimes swelled to six. My food is not so predictable, and my guests have had to endure a few fads) and a few disasters. Every once in a while, I'm too tired and we get pizza instead of the planned meal. Best of all, PJ buys us a special meal four times a year (Chinese New Year, Shakespeare's birthday, my birthday, and back to school). When we started doing this, about fifteen years ago, Marin and Cameron were in middle and elementary school. Now they are college graduates who have moved away, but Cameron is back in the Bay Area and joins us once again. Over the years, we have missed a surprisingly small number of these Wednesdays. We sometimes have work obligations, or are sick or on vacation. The day after 9/11, we were too sad and exhausted.

Here's what happens when the same thing is done with such regularity: when I sit down at that table on Wednesday, all of the other Wednesdays are there with me. Marin and Cameron are small again, sneaking Brussels Sprouts back on my plate, PJ is reading us Psalms or a sonnet, Cameron is happy because I made tacos, Cameron is sad because I made a pasta dish, Marin is entertaining us with one of her lists.

I love my quiet, lonely Sundays, and still am in awe of my Grandmother for giving hers up, but I think I understand why she did it because I wouldn't change Wednesdays for the world.

Nor would I. But let me add a comic memory to the touching ones you cite -- several years ago, when I wanted to start doing volunteer work at Project Open Hand, I had to go to their orientation on Wednesday, something I discovered at the last minute. Both of your children showed up for dinner that day, figuring that Patrick Day would have the best meal of the week. I'm sure what you made was delicious, though, and no doubt both children regretted expressing their disappointment that it wasn't Wednesday Dinner.
And I won't mention that one dinner. You know -- the dish I never mention.
Thanks for making me appreciate brussels sprouts, and for so much else.

No, it wasn't particularly delicious. Their instincts were correct, but there's a reason there's only one Sunday a week.
I almost mentioned the dish you never mention, but realized it would take too much backstory. But thank you for not mentioning it again.
And thank you for making me appreciate saying Grace and listening to poetry and simple Ash Wednesday meals and celebrations and much more.

I love this post about both Wednesdays and Sundays!TWL